I agree
Back to Success Stories

“You can treat yourself with confidence that you are not being naughty, or you can be naughty, fully understanding the consequences.”

30 Pounds Off and 2 Triathlons Finished
How many calories is my homemade lasagna? Will I lose my weight if I eat carbs only? How does exercise add to weight-loss management?

Keith D. is an IT worker who must spend lots of time in front of a screen, so does he live the typical IT lifestyle? Not really. Keith does not take things for granted, which is why he balances his life with hobbies. In his free time, he plays soccer, rides his bike, and visits new and interesting places, as opposed to sitting on a sofa, and even that is not enough for him. He constantly challenges himself and has participated in two triathlons this year: the 2019 Escape the Cape Triathlon (Sprint) and the NJ State Triathlon (Olympic), finishing both without stopping or walking.
Keith started his weight loss way about 3 or 4 years ago when he realized that the concept of “no matter how much you eat, you can always burn it all well” was wrong. “I was a gym hound and generally thought what if I spend an extra half an hour on a bike, extra half an hour on a treadmill, or extra half an hour swimming, then surely that extra doughnut is not gonna be a problem.” In fact, it didn’t quite work that way. “So, I then went through various cycles of trying to eat a bit healthier, trying to exercise a bit more, and really having the concept of calories in vs. calories out,” he remembers. But even THAT was not good enough for Keith. 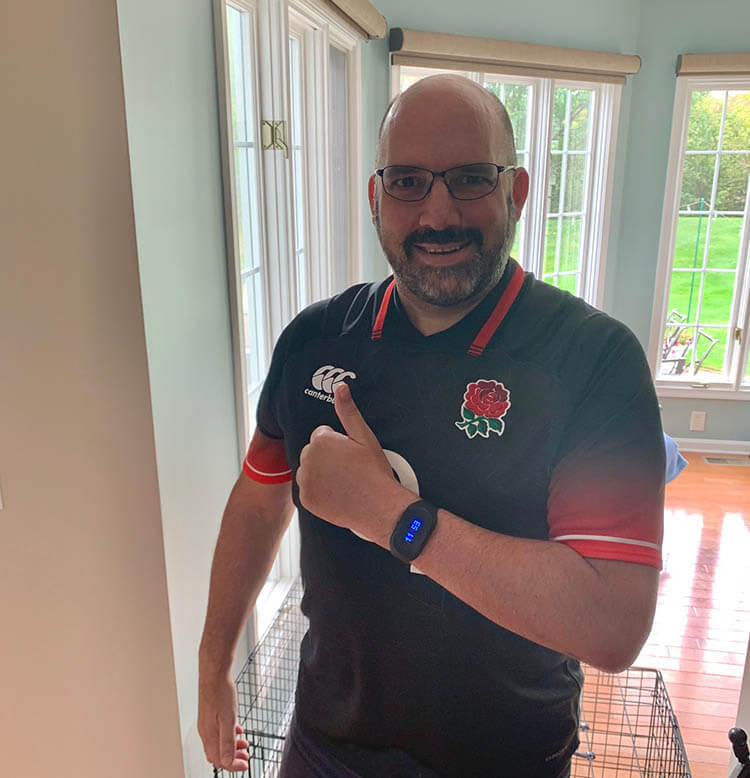 “You have to track the type of calories that you put in and how that is going to affect your body,” he says. “So if you’re going to eat a 100% carbs, then you know that’s not going to do you any good from a performance point of view and it’s not going to do the same from the weight-management point of view. Similarly, if you don’t eat any fat, or if you don’t eat any protein, then you are doing it improperly. And if you take it from the other way around,” Keith continues, “if you don’t eat any carbs, then you will lose weight, but you will not become healthier.”
Keith is sure that anyone wanting to lose weight needs to track calories in against calories out, “but it’s more detailed than that” because one needs to find a “delicate balance” between carbs, proteins, and fats consumed. This is where his HEALBE GoBe stepped in to provide Keith with the help he was seeking.
What is this lasagna doing to me?
Keith is a lucky husband, being married to a woman with excellent cooking skills. He doesn’t need any packaged meals and he absolutely enjoys every bite of her delicious homemade treats. However, the lucky coin has another side, as they say. “I can’t go and buy a lasagna, and that lasagna would tell me how many calories, how much fat, how much sugar, whatever, it is. I don’t do that – if I eat a lasagna, it’s just because my wife has just cooked it,” Keith says. “I mean, it’s really difficult to say how many calories were in that… and it tastes fantastic, so having a second slice of lasagna is almost a guarantee”, a challenge he notes with a laugh.
“That’s why having within a few hours an indication of what you’ve eaten and what to expect – what effect it had on you – allows you to then plan the rest of the day,” Keith says, referring to his GoBe’s calorie-intake feature, “But what it also allows you to do is to say, ‘Well, actually, now I know what a slice of my wife’s lasagna is’. So, next time when she cooks it, I’ll be able to say, ‘Well, if I have this portion size, then I know that this is what it is going to do for me.”
GoBe as a game-changer 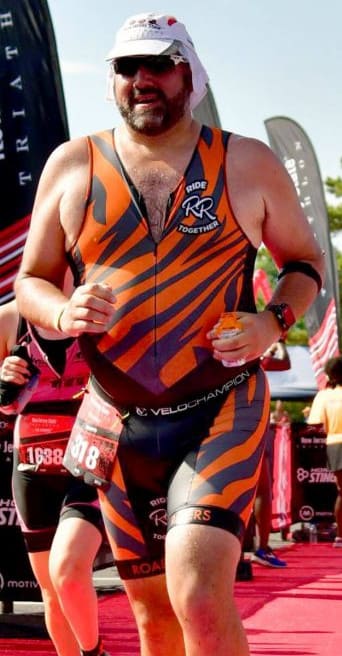 The data itself on calorie content is not a game-changer for Keith, he says, “because it doesn’t matter whether you eat and have a note telling you the Big Mac is going to be a 1,000 calories or you eat an apple and something tells you it’s 60 calories or whatever.” Indeed, the calorie numbers in theory are not a secret; they are available on the web for almost any product or dish. “But actually how these calories are being broken down into the macros and then recorded as actual rather than theoretical – to me, THAT is a game-changer,” Keith exclaims when talking about his GoBe’s invaluables. “The easy bit to me is that it becomes a proactive management of your life based on the information you gained in your own registry, so you don’t suddenly put the GoBe on – and all of a sudden, you’ve got your instant weight management,” Keith continues, “It’s over a period of time you build up your own mental and physical database that tells you what the result of physiological change is for what you eat or don’t eat. And having that level of information is the key to me.”
The interesting thing is that Keith’s habits started changing within the first couple of months while wearing his GoBe. Here is how it’s been happening to him in his words: “At the back of your mind, there is a question: ‘What is it doing for me? I don’t think it’s doing anything for me, I’m not actually gaining anything, I’ve got lots of data, but so what?’ And then, all of a sudden, you realize that, ‘Hold on a minute, over the last two months, I’ve done this 4 times, I’ve done this 10 times… whatever… 5 times.’ And then you actually could check: ‘Well, wait a minute, now I know! If I’ve done it 4 times – I can check – for all times that I’ve done it, did it have the same impact on me?’ And if it’s ‘Yes’, you now have really valuable information that tells you, ‘If you do this again – this is what is going to happen.’ So, once you can read the apple is better for you than a pack of chips – actually you have the data for you personally about what it’s going to do to you – It’s game changing,” our hero concludes.
With or without exercises
Easy diet balancing in accordance with GoBe’s data has been one of the best motivators on Keith’s way to the better self, but it’s not the only one. “There is a bit of me that thinks, ‘I could lose weight without any exercise,’” Keith says, “which is true, you can lose weight that way, as long as you track actively calories in vs. calories out, ‘cause you still burn calories walking around, sitting in front of the computer or watching TV – just not really many,” he continues. “But when you can then combine the correct calories with targeted exercise, it’s phenomenal.”

Keith understands “the role of exercise to supplement a good diet rather than using it to recover a bad one, which never works… Both the GoBe smart band and the HEALBE app are great tools for planning, checking, and validating progress,” he says.

Within the last year and 3 months, the time during which he’s been balancing his diet and cycling with his GoBe on, Keith has lost over 30 pounds and finished 2 triathlons. The first one was the 2019 Escape the Cape Triathlon, a Sprint Triathlon, which is considered to be for beginners, with 400-meter (0.35-mile) swim, 20-kilometer (12-mile) bike race, and 5-kilometer (3.1-mile) run. Doesn’t sound so easy for a newcomer, does it? Someone would probably take a year off to recover, but not Keith. The same year, he has already leveled up and participated in the Olympic Triathlon, which was twice as hard, with a 1.5-kilometer (0.93-mile) swim, 40-kilometer (25-mile) bike race, and a 10-kilometer (6.2-mile) run. He finished both competitions without stopping or walking.

Now Keith is much fitter and spending more active, quality time with his family. He easily manages his specific “eating and non eating times,” truly understanding the outcomes for all his eating and workout behaviors, which, in his own words, means, “You can treat yourself with confidence that you are not being naughty, or you can be naughty, fully understanding the consequences.” Over the past 6 months, he has been told many times that he looks the best he has in years. “This only adds to the enthusiasm to do more,” Keith says with a smile.

Pam’s significantly changed by managing her caloric & water balance only

HEALBE app is available on iOS and Android and as the web app.